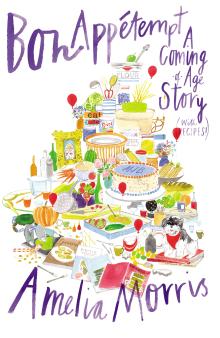 When Amelia Morris found a beautiful chocolate cake in Bon Appétit and took the recipe home to recreate it for a Christmas day brunch, it collapsed into a terrible (but delicious) mess that had to be served in an oversized bowl. It also paralleled the never-quite-predictable situations she's gotten herself into throughout her life, from her one-day career as a six-year-old lady wrestler to her ill-fated job at the School of Rock in Los Angeles. Now author of a blog named one of the best of 2012 by TIME magazine and awarded “Best Food Humor Blog” 2012 by Saveur magazine, Amelia has woven those stories into Bon Appétempt: A Coming-of-Age Story (with Recipes!) – a funny and poignant memoir about collapsing cakes and coming of age in your twenties and thirties. Full of hilarious and touching observations about food, family, unemployment, romance, and the excesses of modern L.A., and incorporating recipes as basic as Toasted Cheerios and as advanced as gâteau de crêpes, Bon Appétempt follows Amelia as she finds that even if some of her attempts fall short of the standard set by a food magazine, they can still bring satisfaction to her and her family and friends.

Amelia Morris is the creator of Bon Appétempt, which TIME magazine named as one of the twenty-five best blogs of 2012. Her work has also been featured in the Los Angeles Times, The Splendid Table, Saveur.com, BonAppetit.com, and McSweeney's. She holds an MFA in Creative Writing from the University of North Carolina, Wilmington, where she was the recipient of the Margaret Shannon Morton Fellowship. She currently lives on the east side of Los Angeles with her husband, baby son, and small dog.