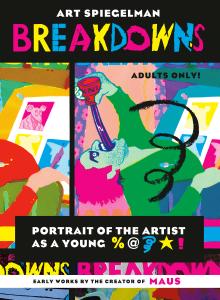 Breakdowns is the chronicle of Spiegelman’s story, featuring vignettes of the people, events, and comics that shaped him. Art Spiegelman will appear on Crowdcast to discuss Breakdowns. Join the event at: https://www.crowdcast.io/e/wbf-breakdowns. Before the event begins, you will see a countdown and the event image.

Breakdowns is told in three ways—in 20 pages of comix that give us the story of his rebellious adolescence, a section on the work he did in the 1970s as an underground comix artist (this book brings back into circulation—and restores—the work of his first book, Breakdowns, out of print for 30 years), and an 8-page essay in which Art looks at the role of comics in the 1970s and how, in ways he didn’t understand until much later, it was already coalescing into a medium whose resurgence now is evident everywhere.

Art Spiegelman is one of the world’s most admired and beloved comic artists, best known for his Pulitzer Prize-winning Holocaust narrative, Maus. Born in Stockholm in 1948, Spiegelman began studying cartooning in high school and drawing professionally at age sixteen. He studied art and philosophy at Harpur College before joining the underground comics movement in the 1960s.

Recent Book
Breakdowns
Get from a Library
Purchase