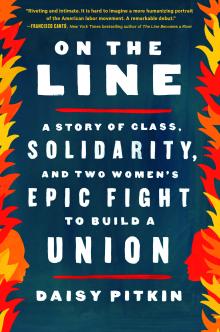 ***Unfortunately, due to unforeseen circumstances, the Wisconsin Book Festival's event featuring Daisy Pitkins for ON THE LINE has been canceled. We will work to reschedule this event virtually. In honor of Daisy, the Festival will be giving away free copies of her latest novel throughout the weekend while supplies last. We look forward to seeing you at our 20th Anniversary Celebration.***

On the Line takes readers inside a bold five-year campaign to bring a union to the dangerous industrial laundry factories of Phoenix, Arizona. Workers here wash hospital, hotel, and restaurant linens and face harsh conditions: routine exposure to biohazardous waste, injuries from surgical tools left in hospital sheets, and burns from overheated machinery. Broken U.S. labor law makes it nearly impossible for them to fight back.

The drive to unionize is led by two women: author Daisy Pitkin, a young labor organizer, who addresses this exhilarating narrative to Alma Gomez García, a second-shift immigrant worker, who risks her livelihood to join the struggle and convinces her fellow workers to take a stand.

Forged in the flames of a grueling legal battle and the company’s vicious anti-union crusade, including the retaliatory firing of Alma, the relationships that grow between Daisy, Alma, and the rest of the factory workers show how a union, at its best, can reach beyond the workplace and form a solidarity so powerful that it can transcend friendship and transform communities. But when political strife divides the union, and her friendship with Alma along with it, Daisy must reflect on her own position of privilege and the complicated nature of union hierarchies and top-down organizing.

Daisy Pitkin looks back to uncover the forgotten roles immigrant women have played in the U.S. labor movement and points the way forward. As we experience one of the largest labor upheavals in decades, On the Line shows how difficult it is to bring about social change, and why we can’t afford to stop trying. 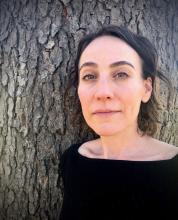 Daisy Pitkin has spent more than twenty years as a community and union organizer, working first in support of garment workers around the world, and then for U.S. labor unions organizing industrial laundry workers. Her essays have been awarded the Montana Prize, the DISQUIET Literary Prize, the New Millennium Award, and the Monique Wittig Writer’s Scholarship. She grew up in rural Ohio and received an MFA from the University of Arizona. Pitkin lives and writes in Pittsburgh, Pennsylvania, where she works as an organizer with an offshoot of the union UNITE.

Recent Book
On the Line
Get from a Library
Purchase