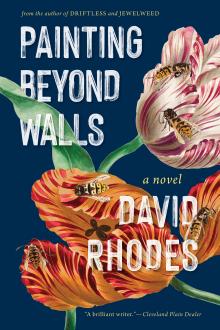 *** Unfortunately, due to unforeseen circumstances, the Wisconsin Book Festival's event featuring David Rhodes for PAINTING BEYOND WALLS has been canceled. If it is possible, we will work to reschedule this event in the future. In celebration of David and what his work has meant to the Festival and to Wisconsin readers for so many years, the Festival will be giving away free copies of his latest novel throughout the weekend while supplies last. We look forward to seeing you at our 20th Anniversary Celebration.***

It is 2027. August Helm is thirty years old. A biochemist working in a lab at the University of Chicago, he is swept off his feet by the beautiful and entirely self-assured Amanda Clark. Animated by August’s consuming desire, their relationship quickly becomes intimate. But when he stumbles across a liaison between the director of his lab and a much younger student, his position is eliminated and his world upended.

August sets out to visit his parents in Words, an unincorporated village in the heart of Wisconsin’s Driftless Area. Here, he reconnects with several characters from his past: Ivan Bookchester, who now advocates for “new ways of living” in an age of decline; Hanh, formerly known as Jewelweed, who tends her orchard and wild ginseng, keenly attuned to new patterns of migration resulting from climate change and habitat destruction; and Lester Mortal, the aging veteran and fierce pacifist who long ago rescued her from Vietnam. Together, the old friends fall back into a familiar closeness.

But much as things initially seem unchanged in the Driftless, when August is hired to look after Tom and April Lux’s home in Forest Gate, he finds himself in the midst of an entirely different social set, made up of wealthy homeowners who are mostly resented by the poorer surrounding communities, and distanced in turn by their fear of the locals. August soon falls head over heels for April, and different versions of his self collide: one in which the past is still present in tensions and dreams, another in which he understands his desire as genetically determined and chemically induced, and then a vaguely hoped-for future with April. When Lester is diagnosed with liver cirrhosis, Ivan comes clean on a ghastly past episode, and April makes a shocking revelation, a series of events ensues that will change all involved forever.

As approachable as it is profound in exploring the human condition and our shared need for community, this is a story for our times.

David Rhodes is the author of Painting Beyond Walls. As a young man, he worked in fields, hospitals, and factories across Iowa. After receiving an MFA from the University of Iowa Writers Workshop in 1971, he published three novels in rapid succession: The Last Fair Deal Going Down (Atlantic/Little, Brown, 1972), The Easter House (Harper & Row, 1974), and Rock Island Line (Harper & Row, 1975). In 1976, a motorcycle accident left him paraplegic.

Recent Book
Painting Beyond Walls
Get from a Library
Purchase