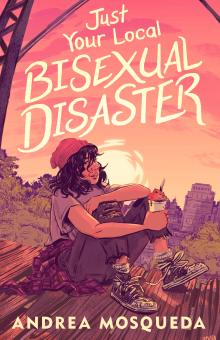 Growing up in Texas’s Rio Grande Valley, Maggie Gonzalez has always been a little messy, but she’s okay with that. After all, she has a great family, a goofy group of friends, a rocky romantic history, and dreams of being a music photographer. Tasked with picking an escort for her little sister’s quinceañera, Maggie has to face the truth: that her feelings about her friends—and her future—aren’t as simple as she’d once believed. Join the event at: https://www.crowdcast.io/e/wbf-bisexual-disaster. Before the event begins, you will see a countdown and the event image.

As Maggie’s search for the perfect escort continues, she’s forced to confront new (and old) feelings for three of her friends: Amanda, her best friend and first-ever crush; Matthew, her ex-boyfriend twice-over who refuses to stop flirting with her, and Dani, the new girl who has romantic baggage of her own. On top of this romantic disaster, she can’t stop thinking about the uncertainty of her own plans for the future and what that means for the people she loves. As the weeks wind down and the boundaries between friendship and love become hazy, Maggie finds herself more and more confused with each photo. When her tried-and-true medium causes more chaos than calm, Maggie needs to figure out how to avoid certain disaster—or be brave enough to dive right into it, in Just Your Local Bisexual Disaster.

Copies of Just Your Local Bisexual Disaster will be distributed for free to attendees. During the event, there will be a link at the bottom of the screen, fill out the form, and a book will be sent to you.

Andrea Mosqueda is a Chicana writer. She was born and raised in Texas’s Rio Grande Valley. She currently lives in Brooklyn with her partner and works in the publishing industry as an assistant editor. When she’s not writing or editing, she can be found doing her makeup, drinking too much coffee, and angsting over children’s media. Just Your Local Bisexual Disaster is her first book.