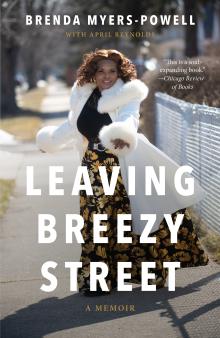 Told in an inimitable voice, Leaving Breezy Street is the stunning account of Brenda Myers-Powell’s brutal and beautiful life.

“Careful—don’t think prostitution is just about money. It’s never just the money. It’s about slipping in at all the wrong places. Getting into dangerous situations and getting out of them. That’s exciting. That’s what you want. But you want something else, too.”

What did Brenda Myers-Powell want? When she turned to prostitution at the age of fifteen, she wanted to support her two baby daughters and have a little money for herself. She was pretty and funny as hell, and although she called herself “Breezy,” she was also tough—a survivor in every sense of the word. Over the next twenty-five years, she would move across the country, finding new pimps, parties, drugs, and endless, profound heartache. And she would begin to want something else, something huge: a life of dignity, self-acceptance, and love. Astonishingly, she managed to find the strength to break from an unsparing world and save not only herself but also future Breezys.

We have no say into which worlds we are born. But sometimes we can find a way out.

Brenda Myers-Powell has been advocating for victims of sex trafficking since 1997. She is the co-founder and executive director of the Dreamcatcher Foundation, and has sat on the board of numerous organizations. In 2020, she was selected to serve on the U.S. Advisory Council on Human Trafficking. Brenda’s work with Dreamcatcher and victims was the focus of the Sundance Award–winning documentary Dreamcatcher.

Recent Book
Leaving Breezy Street
Get from a Library
Purchase