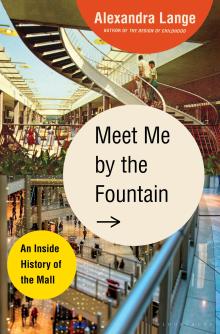 Meet Me By the Fountain

A portrait—by turns celebratory, skeptical, and surprisingly moving—of one of America’s most iconic institutions, from an author who “might be the most influential design critic writing now” (LARB). Few places have been as nostalgized, or as maligned, as malls. Since their birth in the 1950s, they have loomed large as temples of commerce, the agora of the suburbs. In their prime, they proved a powerful draw for creative thinkers such as Joan Didion, Ray Bradbury, and George Romero, who understood the mall’s appeal as both critics and consumers. Yet today, amid the aftershocks of financial crises and a global pandemic, as well as the rise of online retail, the dystopian husk of an abandoned shopping center has become one of our era’s defining images. Conventional wisdom holds that the mall is dead. But what was the mall, really? And have rumors of its demise been greatly exaggerated?

Alexandra Lange is an architecture critic and the author of four previous books, including The Design of Childhood. Her writing has also appeared in publications such as The New Yorker, The Atlantic, New York Magazine, the New York Times, and T Magazine, and she has been a featured writer at Design Observer, an opinion columnist at Dezeen, and the architecture critic for Curbed.