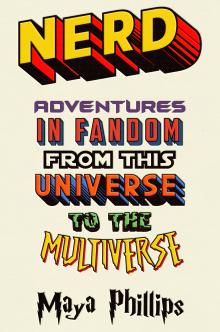 In the vein of You’re Never Weird on the Internet (Almost) and Black Nerd Problems, this witty, incisive essay collection from New York Times critic at large Maya Phillips explores race, religion, sexuality, and more through the lens of her favorite pop culture fandoms.

As a critic at large at The New York Times, Phillips has written extensively on theater, poetry, and the latest blockbusters—with her love of some of the most popular and nerdy fandoms informing her career. Now, she analyzes the mark these beloved intellectual properties leave on young and adult minds, and what they teach us about race, gender expression, religion, and more—especially as fandom becomes more and more mainstream.

Spanning from the 90s through to today, Nerd is a collection of cultural criticism essays through the lens of fandom for everyone from the casual Marvel movie watcher to the hardcore Star Wars expanded universe connoisseur. It’s for anyone who’s ever wondered where they fit into the narrative or if they can be seen as a hero—even of their own story.

Maya Phillips is a critic at large at The New York Times and the author of the poetry collection Erou. She received her BFA in writing, literature, and publishing with a concentration in poetry from Emerson College and her MFA in poetry from Warren Wilson’s MFA Program for Writers. Maya’s alter egos are Natsu Dragneel, the Eleventh Doctor, and Dustin Henderson from Stranger Things. She lives in Brooklyn.

Recent Book
Nerd
Get from a Library
Purchase