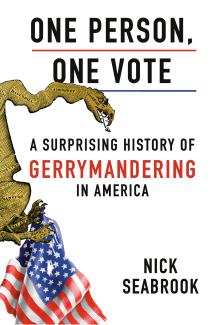 One Person, One Vote

Nick Seabrook,an authority on constitutional and election law and an expert on gerrymandering (pronounced with a hard ‘G’!), begins before our nation’s founding, with the rigging of American elections for partisan and political gain and the election meddling of George Burrington, the colonial governor of North Carolina, in retaliation against his critics. The author writes of Patrick Henry, who used redistricting to settle an old score with political foe and fellow Founding Father James Madison (almost preventing the Bill of Rights from happening), and of Elbridge Gerry, the Massachusetts governor from whose name “gerrymander” derives.

One Person, One Vote explores the rise of the most partisan gerry­manders in American history, put in place by the Republican Party after the 2010 census. We see how the battle has shifted to the states via REDMAP—the GOP’s successful strategy to control state governments and rig the results of state legislative and congressional elections over the past decade. Seabrook makes clear that a vast new redistricting is already here, and that to safeguard our republic, action is needed before it is too late.

Nick Seabrook is a professor in the department of political science and public administration at the University of North Florida. The author of Drawing the Lines: Constraints on Gerrymandering in U.S. Politics, he lives in Jacksonville, Florida.

Recent Book
One Person, One Vote
Get from a Library
Purchase