It was the perfect tabloid story: two 12-year-old suburban girls in Wisconsin stab their friend 19 times at a birthday sleepover, leaving her for dead. When caught hours later, the would-be tween murderers, who thankfully failed in their mission to kill, said they did it to appease Slenderman, a crowd-sourced internet demon. But in this deeply researched and compassionate new book SLENDERMAN: ONLINE OBSESSION, MENTAL ILLNESS, AND THE VIOLENT CRIME OF TWO MIDWESTERN GIRLS author Kathleen Hale goes beyond the sensational elements of the crime to tell a more complex and multidimensional story about childhood mental illness, the punitive and politicized American judicial system, the trials of adolescence, and the seductive power of the internet’s far corners.

Drawing on court transcripts, police reports, individual reporting, and exclusive interviews, Hale reveals for the first time the full story of the 2014 stabbing by Morgan Geyser and Anissa Weier. She explores the years leading up to the horrifying attack—including Morgan’s previously undiagnosed early-onset schizophrenia—and the crime’s judicial aftermath, in which the 12-year-olds were prosecuted as adults, and Morgan, in the throes of a full-blown psychosis at this point, was denied treatment, antipsychotic medication, and any human touch. In this account, the salacious narrative about two soulless girls inspired to violence by the internet becomes a truer, broader story about the meaning of justice, accountability, and victimhood and the country’s woeful lack of childhood psychiatric services, told through a heart-wrenching human drama in which all the actors were very, very young. They were just girls. 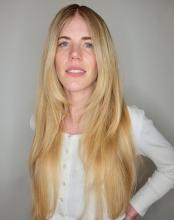 Kathleen Hale is the author of two young adult novels and one essay collection. She has written for the Guardian, Hazlitt, and Vice, among others, and is a writer and producer for Outer Banks on Netflix. She was born in Wisconsin and lives in Los Angeles.

Recent Book
Slenderman
Get from a Library
Purchase