Things I Wish I Told My Mother

For fans of One Italian Summer, Things I Wish I Told My Mother is a book club selection for the ages. A mother and daughter unpack a lifetime's secrets while on vacation in Paris.

Every daughter has her own distinctive voice, her inimitable style, and her secrets.

Laurie Ormson is an artist, a collector of experiences. She travels the world with a worn beige duffel bag.

Every mother has her own distinctive voice, her inimitable style, and her secrets.

Laurie’s mother is the famous “Dr. Liz.” An elegant perfectionist. She travels the world with a matched set of suitcases.

When Laurie invites her mother on a trip to Paris and Norway, she sees an unexpected sparkle in her mother’s eyes. So begins Things I Wish I Told My Mother. You will wish this novel never ends.

Laurie and Dr. Liz are the female version of The Odd Couple.

Authors Susan Patterson and Susan DiLallo were inspired to write their moving novel by the shared experience of beloved mothers who lived into their nineties then died in the same year.  Their co-author, James Patterson, was usually around to fetch coffee, tea, and sandwiches while the two Susans wrote.

Susan Solie Patterson has a Bachelor of Science/Master of Fine Arts degree from the University of Wisconsin-Madison, where she was an All-American swimmer. She is the author of Big Words for Little Geniuses, a New York Times bestseller.

Recent Book
Things I Wish I Told my Mother
Purchase 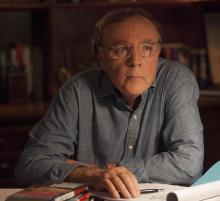 James Patterson is the world’s bestselling author. His enduring fictional characters and series include Alex Cross, the Women’s Murder Club, Michael Bennett, Maximum Ride, Middle School, and Ali Cross, along with such acclaimed works of narrative nonfiction as Walk in My Combat Boots, E.R. Nurses, and his autobiography, James Patterson by James Patterson. Bill Clinton (The President Is Missing) and Dolly Parton (Run, Rose, Run) are among his notable literary collaborators.