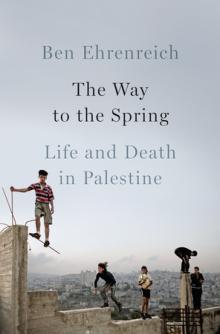 The Way to the Spring

Ben Ehrenreich first started reporting from the West Bank in 2011, on an assignment for Harper’s magazine.  He went back again for the New York Times the following year, which resulted in a powerful, much talked-about cover-story for the magazine.  Palestine, it seemed, had gotten under Ehrenreich’s skin.

Eventually he moved to Ramallah, and started writing what would become The Way to The Spring: Life and Death in Palestine. Ehrenreich was moved by the injustices that he witnessed, and by the general silence about them in most U.S. media.  As well informed as he was on the Arab-Israeli conflict, he nonetheless was consistently shocked by what he saw, and by how little the vast majority of people in the U.S. (and even in Israel, just few miles away) understood about the lived realities of the occupation.  He felt strongly that he wanted to write to break through those silences.

In cities and small villages alike, men and women, young and old, a group of unforgettable characters shared their lives with Ehrenreich and made their own case for resistance and resilience in the face of life under occupation. Blending political and historical context with deeply human stories, The Way to the Spring makes clear that conditions on the ground are changing--and getting worse, in an accelerating dynamic that should provoke the conscience of us all. In a great act of bravery, empathy and understanding, Ben Ehrenreich, by placing us in the footsteps of ordinary Palestinians and telling their story with surpassing literary power and grace, makes it impossible for us to turn away.

Presented in partnership with the Madison-Rafah Sister City Project.

Ben Ehrenreich is the author of two novels, Ether and The Suitors. His writing has appeared in Harper's, The New York Times Magazine, and the London Review of Books, among others. A recipient of the National Magazine Award, Ehrenreich lives in Los Angeles.