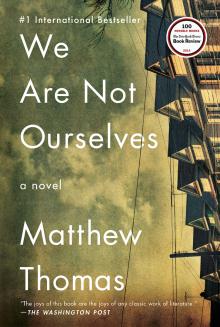 We Are Not Ourselves

Born in 1941, Eileen Tumulty is raised by her Irish immigrant parents in Woodside, Queens, in an apartment where the mood swings between heartbreak and hilarity, depending on whether guests are over and how much alcohol has been consumed.

When Eileen meets Ed Leary, a scientist whose bearing is nothing like those of the men she grew up with, she thinks she’s found the perfect partner to deliver her to the cosmopolitan world she longs to inhabit. They marry, and Eileen quickly discovers Ed doesn’t aspire to the same, ever bigger, stakes in the American Dream.

Eileen encourages her husband to want more: a better job, better friends, a better house, but as years pass it becomes clear that his growing reluctance is part of a deeper psychological shift. An inescapable darkness enters their lives, and Eileen and Ed and their son Connell try desperately to hold together a semblance of the reality they have known, and to preserve, against long odds, an idea they have cherished of the future.

Through the Learys, novelist Matthew Thomas charts the story of the American Century, particularly the promise of domestic bliss and economic prosperity that captured hearts and minds after WWII. The result is a riveting and affecting work of art; one that reminds us that life is more than a tally of victories and defeats, that we live to love and be loved, and that we should tell each other so before the moment slips away.

Epic in scope, heroic in character, masterful in prose, We Are Not Ourselves heralds the arrival of a major new talent in contemporary fiction. 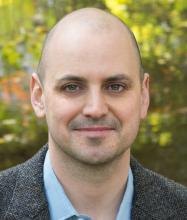 Matthew Thomas was born and raised in New York City. A graduate of the University of Chicago, he has an MA from the Writing Seminars at Johns Hopkins University and an MFA from the University of California, Irvine. His New York Times-bestselling novel We Are Not Ourselves has been shortlisted for the Flaherty-Dunnan First Novel Prize from the Center for Fiction, longlisted for the Guardian First Book Award, nominated for the Folio Prize, and named a Notable Book of the year by the New York Times. He lives with his wife and twin children in New Jersey.

Recent Book
We Are Not Ourselves
Purchase